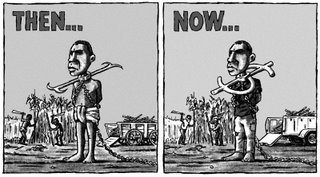 Most people would probably say yes, the Emancipation Proclamation freed the African slaves in 1865. Black people are no longer exploited to work manual labor for the benefit of their owners, but is this the truth? Today maybe  no one stands over us with a whip and forces us to work but other methods are used. If you decide not to work for an owner/employer how would you pay for rent, food, water, clothing, and etc.? Due to the fact that the majority of blacks are landless, all their essential needs must be bought by the yielding of their labor power. The majority of people are landless and have become bound to wage slavery.

Before wage slavery the so called Negro on the plantation was provided with shelter, food, clothing, and also health insurance. So once slavery was so-called “over” and the master said, “you all are free to go,” where do you believe the majority of the slaves went? The fact is, looking at the position of many so-called freed blacks in the north, many of them stayed! The freed slaves of the north, according to W.E.B Dubois, struggled with job security due to fierce competition of landless whites, who used brutality and violence to defend their livelihood.

As for those who decided to go up north, even though many of them were skilled tradesmen, now found themselves competing against landless blacks and whites for the bare necessities to live. In order to avoid death for lack of shelter, food and clothing many blacks resold themselves to land owners under the system of indentured servitude. The working class landless blacks and whites were only free to choose which master they would serve.

In 1845 Mike Walsh, a New York politician, wrote a column in the Subterranean, “Demagogues tell you that you are freemen. They lie- you are slaves, and none are better aware of the fact than the heathenish dogs who call you freeman. No man devoid of all other means of support but that which his labor affords him can be a freeman, under the present state of society. He must be a humble slave of capital, created by the labor of the poor men who have toiled, suffered, and died before him” (Lgnatiev, 1995). So-called black people were never meant to receive 40 acres and a mule. Many of them like many of whites were landless, which forced them into involuntary servants. While many would say they have a choice, they go into the market without any resources but only their service for sell.

George Henry Evans, an advocate in the new York Men’s working party, wrote to antislavery leader Gerrit Smith, “I was formerly, like yourself, sir, a very warm advocate of the abolition of slavery. This was before I saw that there was White slavery. Since I saw this, I have materially change my views as to the means of abolishing Negro slavery. I now see, clearly, I think, that to give the landless black the privilege of changing masters now possessed by the landless white, would hardly be a benefit to him.” (Ignatiev 1995)

Looking at this hard fact stated by George Evans, Blacks began getting in where they fit in, by becoming strike breakers. When the whites were on strikes the blacks quickly filled the positions, which led to mobs of white people rioting against black people. In Philadelphia 1834, John Binns reported that a riot occurred which resulted in the burning of Black homes due to some employers hiring Blacks over Whites, leaving them jobless. Blacks were lynched, beaten and burned out of the building trades occupations. Besides using brutality, many European immigrants would purposely work for lower wages and boycott employers that would hire blacks.

In 1851, the African Repository reported, “In New York and other eastern cities, the influx of white laborers has expelled the Negro almost en masses from the exercise of the ordinary branches of labor. You no longer see him work upon buildings, and rarely is he allowed to drive a cart of public conveyance. White men will not work with him.” (Ignatiev, 1995)

John Finch, English Owenite, wrote, “The working people reason thus, competition among free white working men here is even now reducing our wages daily; but if the blacks were to be emancipated, probably hundreds of thousands of them would migrate into these northern states, and the competition for employment would be consequently increased, that wages would speedily be low or lower here, than they are in England; better, therefore, for us that they remain slaves as they are.” (Ignatiev, 1995)

You can see from the information presented the Emancipation Proclamation was not made to free the slaves. In actuality the slaves were freed in order to further strengthen the progress of capitalism. This was achieved by social engineering-causing division amongst the landless working class and also increasing competition to lower wages. This divide and conquer only prospered and profited the industrial land owners.

The truth is, “wage” slavery remains dominant in today’s time. the  majority of us are landless and have no skills. We depend on the capitalist, with the hope that he will purchase us so that we can have food, clothing and shelter. So I ask, are we still slaves? If not, then what are we? For if the truth be told a people made up of servants are not free. The people have become more like a dog unleashed, but only free to run in the perimeter of his owner’s backyard!

A publication of the Nazarene Messianic Party.

Let us build on true independence and salvation for the people.

One thought on “Were The African Slaves Freed By Lincoln’s Emancipation Proclamation? Or Are So-Called Black People Still In Slavery?”