With penetrating insight Marx sums up the devastating effects capital has on society–when its will is imposed on man, alienating him from himself,

”We have seen how this absolute contradiction between the technical necessities of Modern Industry, and the social character inherent in its capitalistic form, dispels all fixity and security in the situation of the laborer; how it constantly threatens, by taking away the instruments of labor, to snatch from his hands his means of subsistence, and, by suppressing his detail-function, to make him superfluous. We have seen, too, how this antagonism vents its rage in the creation of that monstrosity, an industrial reserve army, kept in misery in order to be always at the disposal of capital; in the incessant human sacrifices from among the working-class, in the most reckless squandering of labor-power, and in the devastation caused by a social anarchy which turns every economical progress into a social calamity. This is the negative side.

But if, on the one hand, variation of work at present imposes itself after the manner of an overpowering natural law, and with the blindly destructive action of a natural law that meets with resistance at all points, Modern Industry, on the other hand, through its catastrophes imposes the necessity of recognizing, as a fundamental law of production, variation of work, consequently fitness of the laborer for varied work, consequently the greatest possible development of his varied aptitudes. It becomes a question of life and death for a society to adapt the mode of production to the normal function of this law. Modern Industry, indeed, compels society, under penalty of death, to replace the detail-worker of today, crippled by life-long repetition of one and the same trivial operation, and thus reduced to the mere fragment of a man, by the fully developed individual, fit for a variety of labors, ready to face any change of production, and to whom the different social functions he performs, are but so many modes of giving free scope to his own natural and acquired powers” (K. Marx Capital 1954 Moscow).

Marx synthesized his analyses and sums up his conclusions,

”We saw, when analyzing the production of relative surplus-value: within the capitalist system all methods for raising the social productiveness of labor are brought about at the cost of the individual laborer; all means for the development of production transform themselves into means of domination over, and exploitation of, the producers; they mutilate the laborer into a fragment of a man, degrade him to the level of an appendage of a machine, destroy every remnant of charm in his work and turn it into a hated toil; they estrange from him the intellectual potentialities of the labor-process in the same proportion as science is incorporated in it as an independent power; they destroy the conditions under which he works, subject him during the labor-process to a despotism the more hateful for its meanness; they transform his life-time into working-time, and drag his wife and child beneath the wheels of the Juggernaut of capital.

But all methods for the production of surplus-value are at the same time methods of accumulation becomes again a means for the development of those methods. It follows therefore that in proportion as capital accumulates, the lot of the laborer, be his payment high or low, must grow worse. The law, finally, that always equilibrates the relative surplus-population, or industrial reserve army, to the extent and energy of accumulation, this law rivets the laborer to capital more firmly than the wedges of Vulcan did Prometheus to the rock. It establishes an accumulation of wealth at one pole is, therefore, at the same time accumulation of misery, agony of toil, slavery, ignorance, brutality, mental degradation, at the opposite pole, i.e., on the side of the class that produces its own product in the form of capital” (K. Marx Capital 1954 Moscow).

Marx rounds off with this famous passage,

”Along with the constantly diminishing number of the magnates of capital, who usurp and monopolize all advantage of this process of transformation, grows the mass of misery, oppression, slavery, degradation, exploitation; but with this too grows the revolt of the working class, a class always increasing in numbers, and disciplined, united, organized by the very mechanism of the process of capitalist production itself. The monopoly of capital becomes a fetter upon the mode of production, which has sprung up and flourished along with, and under it. Centralization of the means of production and socialization of labor at last reach a point where they become incompatible with their capitalist integument. This integument is burst asunder. The knell of capitalist private property sounds. The expropriators are expropriated” (K. Marx Capital 1954 Moscow). 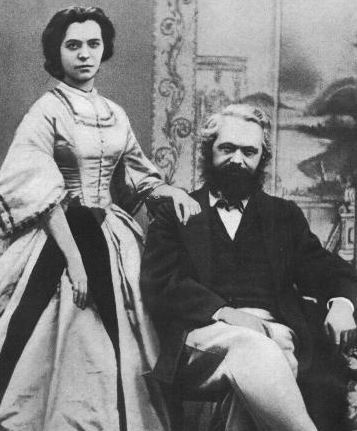